After the long journey to Michigan, we finally made it to Detroit. We stayed at the Detroit Greenfield RV Park in Ypsilanti, MI. The park was very nice, but the sites were very close together and it was packed for the upcoming Fourth of July weekend. It was nice to be able to catch up on some sleep. It was here that we were introduced to the State bird, the Michigan mosquito. I have heard tales of this monster but nothing prepared me for the kamikaze onslaught. There were dive bombers, then you had your acrobats. I looked like I was doing the funky chicken trying to ward them off.

The next morning we headed to the Henry Ford museum. All I can say is “Wow!” This place was amazing and huge. It was cool to see the history of modern machinery from plows to automobiles. There was something for everyone here. I even found my dream vacation home. 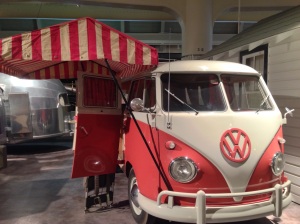 I think this would fit me just nicely.

After the museum, we headed over to the Greenfield Village. It was pretty spectacular too. I felt like I had stepped back into time. The steam locomotive was blowing its whistle while transporting tired tourists across the park. Models T’s were putting around with men wearing fedoras’. We stopped by Thomas Edison’s Menlo Park. My husband had reached his mecca of sorts. He admires Edison for his genius. All you people with tattoos out there can thank Edison for his invention of the automatic writing pen. Someone figured out that it would be quite handy for writing on people.

After Detroit we headed off to see my family in Tawas City, MI. I love this place. I have such fond memories of visiting here and seeing my grandparents, aunts, and uncles. We watched the fireworks from the top of the old Norman’s building. It was a blast <Pun intended>!! I think the hardest part about this visit was leaving. We stocked up on some local maple syrup from the Britt Family (http://www.brittmaplesyrup.com/). They happen to be my uncle’s neighbor. I was very glad of that! It is like eating heaven’s nectar……if heaven has nectar. Ha!

I hope everyone had a fabulous Fourth of July! I will continue the journey tomorrow with our trip to the Big Mac!

From our lovely Robinson Rambler…..Amy